Those lovely people @bookouture came up trump’s again for me as a #BookReviewer #BookBlogger over on @NetGalley. They accepted me for @TillyTenWriter #Christmas book “A Very Vintage Christmas.

I am really glad @bookouture are out there as they seem to have lots of my kind of writer working with them and Tilly is one of them. I have read a lot of her work and have always really enjoyed it. I adore the cover of this book, it reminds me of my childhood back in the 70s, traditional colours with no pink and purple baubles.

The storyline had me smiling throughout. it was a comfortable read, no nasties. i adored the quirkiness of it and the characters. While reading it, it made me feel all warm inside. I could imagine a warm fire and hot chocolate.

This really is another Tilly Treasure and one that will stay with me for some time.

The fairy lights are up and shoppers are flooding the snowy seaside promenade. It’s going to be a busy month at Forget-Me-Not Vintage, a magical shop with a warm heart where every item has a story to be told.

With bright red hair and an infectious smile, Dodie is a hopeless romantic and absolutely one of a kind, just like the pieces in her shop.

When Dodie finds a love letter in the pocket of an old woollen coat, she makes it her mission to deliver it to its rightful owner. Following the address, she manages to persuade the handsome but reluctant new tenant, Edward, to help her with her search.

As the story of the letter unfolds, Dodie is there, as always, to pick up the pieces and make things right. But who will be there for her when her own love story needs a helping hand?

Is it too much to dream of a happy ending like the ones in the black and white movies she adores?

As a #AriaAddict and #BookBlogger, I was so thrilled when @Aria_Fiction Whizzed through a copy of @LisaJHobmanAuth , Contemporary Romance, A Seaside Escape. 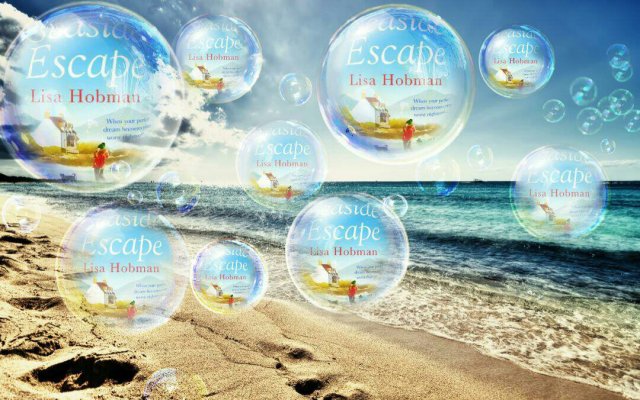 All work and no love can make for a dull life. But cupid’s arrow has a habit of striking when you least expect it… A heartwarming, feel-good romance to curl up with this winter perfect for the fans of Marian Keyes and Veronica Henry.

Concentrating solely on her business, she has almost given up on finding someone to love. That is until she literally falls into the arms of a handsome, intriguing stranger who becomes her Knight in shining armour.

The whirlwind romance that ensues changes her life-path irrevocably. However, the road to true love is never smooth and things don’t always turn out how you expect…

*Shortlisted for the RNA Contemporary Romantic Novel of the Year 2014*

This book was previously published as A Bridge Over the Atlantic.

I am a Cover Lover, and always have been a soft touch for a gorgeous cover, it even looks as if my little 15 year old Patterdale cross,  Bertie has got a staring role on the cover of this book!! its not him but it really does look like him. 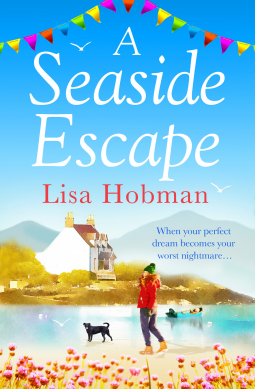 A Seaside Escape did not disappoint, neither did the characters, they came over as “normal” who chatted about everyday things and laughed, cried and in general made this a very enjoyable book to read.

I am a music lover and loved the playlist idea! A Yorkshire Lass too so been somewhere not too far from me, kind of felt as if i was reading about home until Scotland was on the horizon, then my ears and eyes really opened. I adore that part of the world and loved  the descriptions of the area as well as the other people which appeared along the way.

A book is what you make it, just like life… This was my kind of read…

The lovely @Sharon_Booth1 kindly sent over This Other Eden for me to read. I’d seen an interview over on @helenpollard147 blog and I just knew I needed to have this author on my book shelf.

Oh Wow!!!. Until now I was a Sharon Booth virgin, how on earth has that happened? We are both apparently from the same neck of the woods and I’ve somehow missed her work.

I really adored this Yorkshire based book, as a Yorkshire Lass I felt at home reading it if I’m honest. The story had me hooked. We had deception, laughs and romance with a few little twists and of course the Yorkshire Dales would not be complete without sheep and a sexy farmer.

This really was an enjoyable read and I just know that I will be shouting from the rooftops for book two. 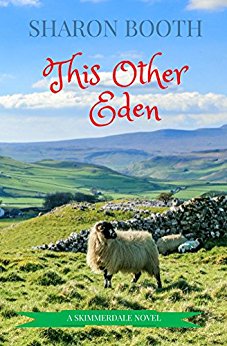 Eden wants to keep her job, and, as that means spending the summer caring for three young children in the wilds of the Yorkshire Dales, she has no choice but to go along with it. Her consolation prize is that their father is unexpectedly gorgeous. Sadly for Eden, she’s not quite herself any longer… Honey wants to spend the summer with her married politician lover. The only problem is, there are quite a few people determined to put obstacles in her path. But what Honey wants, Honey usually gets… Cain wants a knighthood and is willing to sacrifice almost anything for it. If his daughter is putting that goal in jeopardy, it’s time to get tough… Lavinia wants to keep her marriage intact, and if that means turning a blind eye to her husband’s philandering, she’ll do it. But that doesn’t mean she can’t have someone else spying for her… Eliot wants to care for his children, and to be left in peace to heal. When he gets an unexpected guest, he wonders if it’s time to start living again. But is this sheep farmer having the wool pulled over his eyes?Cake baking, jam making, gymkhana games and sheep showing. Blackmail, deception, spying and cheating. Laughter, forgiveness, redemption and falling in love. A lot can happen during one summer in Skimmerdale…
🐏🐏💖💖🐑🐑💖💖🐏🐏💖💖🐑🐑💖💖🐏🐏💖💖🐑🐑💖💖🐏🐏💖💖🐑🐑💖💖
Follow Sharon on FACEBOOK

Here’s the link to Purchase the book from AMAZON

I have been #reviewing #books for many years now. Its a hobby.I love to #read so why not combine the two and help authors to get their hard work “out there”

3, Reviewing Their Book on Amazon 📚

One of my favourite publishers @bookouture have once again put a smile on my face with @TillyTenWriter recent publication Christmas at the Little Village Bakery.

Yes its only August but when the sun is beating down and you are sat in the garden with fruit juice, on a freshly mown lawn and your little old dog at your feet, what more could a girl want than to be reading about a quaint little village, covered in snow, with wonderful characters which make you want to befriend them and a storyline which left me wanting more. The cover just drew me in too and it really didn’t disappoint.

It’s time to get toasty by the fire with a glass of mulled wine and a slice of chocolate yule log sprinkled with a little romance. Welcome to Christmas at the Little Village Bakery. Snow is falling in Honeybourne and Spencer is bringing home his American fiancée Tori for a traditional English Christmas with all the trimmings. But when his hippie mum and dad meet her high-maintenance parents, sparks of the wrong sort start to fly. Then Spencer bumps into his first love Jasmine and unexpected feelings come flooding back. Millie is run off her feet with Christmas orders at the Little Village Bakery and new baby Oscar. Thank goodness her cousin Darcie is here to help her. Although she does seem to be rather flirty with Millie’s boyfriendDylan. Will Darcie ever find true love of her own? And is marrying Tori a terrible mistake for Spencer if his heart is with someone else?

This was quite an interesting book of poetry which was so skillfully written you could feel the tension in the writing. I was actually out of my comfort zone with this book but only because its not my usual genre.

Trébuchet is the much-anticipated follow-up to Danniel Schoonebeek’s debut book of poems, American Barricade, which was named one of 2014’s ten best books of poetry by Poets & Writers and hailed as a “groundbreaking first book that stands to influence its author’s generation” by Boston Review.

The poems in Trébuchet—which takes its name from the catapult used to break down walls and barriers during medieval wars—are at once combative and incendiary, tackling contemporary politics in a more direct, personal way than Schoonebeek ever has before. Addressing gun violence, poverty, fascism, surveillance, white privilege, the protest movement, censorship, American history, torture, and net neutrality, Schoonebeek’s writing is marked by a unique use of slang and jargon, manipulation of white space, and precise rhythm on the page. His poems have been praised by many critics for their momentum, obsession with weird language, and the precision of their enjambments and end-stopped lines.

Though American Barricade and Trébuchet speak to one another and map an evolving poetics, Schoonebeek’s second collection is a departure from the aesthetics and obsessions that defined his first, which was invested in the politics of family dynamics and the insistence in this country on obtaining power and wealth. If American Barricade was the book that wanted to kick open the door, Trébuchet is the book that wants to tear the door off its hinges. 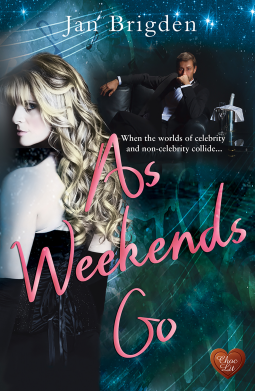 As I live just up the road from York, where the story is set, I thought I would see if I could make a connection. Unfortunately this story wasn’t for me. It kind of reminded me of Jilly Coopers work and that’s not my cup of tea. Please don’t get me wrong, this book really is well written its just, footballers wives kind of thing isn’t for me.

What if your entire life changed in the space of a weekend?

When Rebecca’s friend Abi convinces her to get away from it all at the fabulous Hawksley Manor hotel in York, it seems too good to be true. Pampering and relaxation is just what Rebecca needs to distract herself from the creeping suspicion that her husband, Greg, is hiding something from her.

She never imagined that by the end of the weekend she would have dined with celebrities or danced the night away in exclusive clubs. Nor could she have predicted she would meet famous footballer, Alex Heath, or that he would be the one to show her that she deserved so much more …

But no matter how amazing a weekend is, it’s always back to reality come Monday morning – isn’t it? 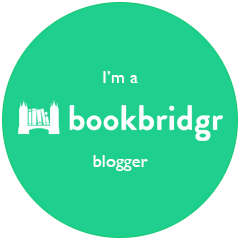